My interest in WvWvW comes and goes, but I’m definitely one of the more idiotic WvWvW players out there. Actually, I’m fairly certain that more experience will improve my performance, but I definitely haven’t learned from these yet

[As an aside, I was zerging this one time, and I watched an enemy commander lead his entire zerg off of one of those cliffs, so they were practically dead before we even hit them 🙂 Hilarious when it’s someone else!]

2. While I enjoy/obsess about GW2 as much as the next person, I’m definitely no expert on the mechanics and skills of each profession. That being said, I find myself in the sad position of being easily killed by enemy thieves 1v1 waaaay too often. You’d think I’d learn, right? It’s like they have a homing device for players they can kill instantly… I hate thieves 😦 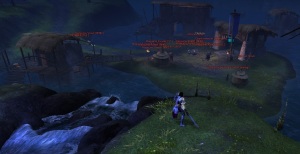 Yeahhhh, I’m not loving these odds.

3. I get distracted by all the purty legendaries that people have and are waving around. It’s really starting to make me jealous 😦

4. I somewhat fail to use the important points of each class in WvWvW. So while I’ve realized that on my guardian that boons and Lines of Warding are essential when zerging (I LOVE stopping a whole oncoming horde of enemies with it), when I’m on my mesmer, arguably one of the most useful characters for porting and steathing, ec., I’m pretty clueless.

5. In addition to being useless and careless and all that I listed above, I also tend to run around WvWvW like a headless chicken. If I can find a commander I like, I might stick with them, or I might attach onto some roamers who seem to know what they’re doing, but I honestly think I enter WvWvW just to get that feeling of gut-wrenching panic as I see all ‘dem red names on my screen and thinking “well it’s a good day to die.”

6. I sometimes derp and seemingly forget what the AOE red circles mean. Like, oh they have an arrow cart that’s hitting me?  Pshh I hardly ever die in PvE on my guardian so I’m probably fine! When people help res me, I’m really humbled and careful, for about 30 seconds.  And then I’m trying again.

7. I tend to be uber-careful in terms of the skills and utilities I equip for WvWvW, but I’m super careless at the worst times. For example, take the time I thought it’d be a good idea to mine some silver ore outside a friendly keep. I didn’t notice the enemy zerg until I was snared/stunned/rooted and quickly died afterwords. To make things worse, I’m pretty sure they took the keep too, so I’m not feeling valuable to my server atm 😦 How embarrassing.

Do you WvWvW? What are some of the silliest things that’s happened to you?